This Is No Joking Matter 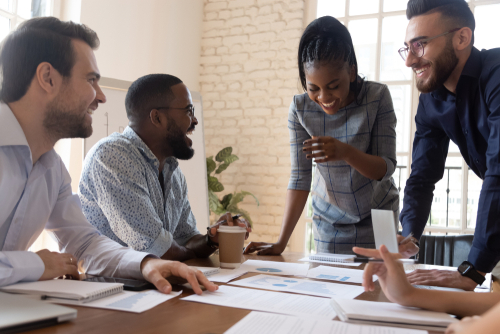 We’ve all experienced joking in the workplace. We’ve enjoyed the good use of humor when it is something that everyone is in on and is not at anyone’s expense. We’ve also been in a room during the uncomfortable or ugly moment when someone is the brunt of a joke meant to hurt or put someone down.

In a society where roasting someone, be it a celebrity or your boss is seen as perfectly acceptable fun or where cultural norms such as playing the dozens or giving family members nicknames that aren’t always flattering are just a part of the culture, it can be difficult to draw lines. But you have to establish boundaries in order to keep yourself emotionally safe. If you are a leader, creating a work environment that allows everyone to be free from being targeted in any way, especially through jokes is a major part of your responsibility.

Yes, it is difficult and tiring and often requires you to look at yourself and how you participate in making people feel unsafe at times. What did I just say? Yes, listen… living in this kind of culture we all can learn to be party to joking at someone else’s expense especially if they’re not in the room. Please, I am guilty and had to learn some hard lessons as a leader, so let me offer you some help too.

Responding to a joke that targets you or someone else can get you accused of ‘being too sensitive’ or ‘not being able to take a joke.’ This has caused many people to doubt, blame and question themselves even though they were not the ones in the wrong. As a leader, there are things you can do to create the safety that is needed.

We are living in a time where people are pushing humor to the edge and far too often at the expense of others. Creating clear boundaries and setting the tone for the workplace is our job as leaders even if it is uncomfortable and even if it is revealed that we are the main perpetrators.

Ouch. We model first taking feedback and making the necessary changes. It is one of the important ways to create inclusion in a diverse workforce. People have to look at themselves and understand the difference between jokes that create tension and those that release it.

Are you ready to wade into these waters? They’re deep.