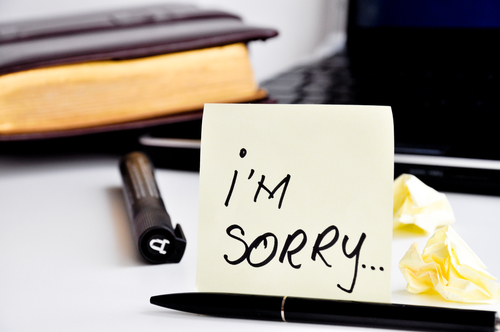 A recent Time Magazine cover revealed the newest hit in the business world, something called IQ or personality assessment tests. Apparently they are all the rage with HR departments for hiring, rating, evaluating and promoting. For example, they ask questions like… Are you shy? Do you enjoy giving parties? Do you fantasize about being famous? A question that seems to be all the rage with all of you loyal readers of my blog is… How good are you at apologizing?

Many of you answered a resounding, Not Good At All! I actually had to chuckle when I received the numerous emails, phone calls and even a text from so many of you confessing that getting an apology out of you when others don’t apologize to you is harder than extracting wisdom teeth. Wow! Now that is exciting!

As the late, great Joan Rivers (whose humor I adored, say what you will) would say, “Can We Talk?!”

I have learned to apologize and am still no expert in that department but I find it to be liberating. It certainly is a lesson on how to be vulnerable, which wouldn’t be so hard if the world would just help us remember that we are here to make mistakes. Therefore, apologies are a part of our language of being human.

With that said, I have experienced some head-shaking, “you’ve got to be kidding me”, “did they really just say that,” twisted apologies in my day.


Twisted Apology #1 – You Couldn’t Look At Me and Tell?

Oh yes… because I am a conflict resolution strategist and studied body language in college, I ought to know just by looking at you that you are delivering your apology through your gifted mental telepathy skills. Yes, reading body language is essential but actually hearing the words… Priceless.

Twisted Apology #2 – Make Them Feel Guilty For Their Feelings

An ex-boyfriend once said, “So you really gonna put me through this right? You are gonna keep looking at me like that until I say it? And this is all because your feelings are hurt? I mean you can’t even take a joke?” Ten minutes later as I was walking away he screamed, “SO YOU’RE REALLY GONNA MAKE ME SAY IT? FINE, SORRY!” My response… NO.

I used to have a friend who was trained in the clever art of making you think you were losing your mind. After a heated argument during which she stormed out, she showed up the next day smiling as if nothing had happened between us. When I asked for an apology, she stared me in the face and declared, “I said sorry, weren’t you listening?”

We argued a lot during this friendship. By the fourth time this happened and after actually getting my hearing checked, I asked for my apology in writing. Apparently, she didn’t hear me. Friendship over.

Twisted Apology #4 – Blame it on Your Ethnicity, Race, Age, Sex

In this category, I have heard it all. A long time boyfriend told me often, “You’re lucky. I’m a Latin man. We don’t say sorry easy. I must really love you.” Mind you, he still never really said sorry. Apparently, this technique is pretty popular among many demographics. I heard it used constantly by the adults in my life when I was growing up.

“I’m too old to apologize. Grownups don’t apologize to children. I’m a Black mother… I don’t owe you an apology, the world owes me one!” The secret to this is knowing that this is as close to an apology as you are going to get.

When I was in high school, my boyfriend and I were having a heated argument on the phone. At some point, I realized my part in the argument and apologized, I’ll admit reluctantly. When he accepted without offering up one of his own, I pressed him. “Why can’t you just apologize?” No response. After ten minutes of arguing, he shouted, “Fine, you want to know why?” The next voice I heard was his Mother’s. “It’s my fault, I raised him that way, but baby He is Sorry”… I Agreed!

Twisted Apology #6 – Deliver A Speech With It

A co-worker who I had a lot of friction with was gifted at making me feel sorry I ever asked her to apologize . First of all, it would take her forever to say it and when she did, it never ended. After giving up and going back to my desk, she would storm in to my office and deliver this rant. “Fine, you want me to say sorry? Fine. I AM Sorry. You happy now? I said it. I Am Sorry. You just have to be right. You have to have the last word. Well, fine then. I apologize. Okay? Happy now?” And all I kept thinking was where is that music they play at the Oscars to cut people off when they are going on wayyyyy too long?

Twisted Apology #7 – Intentionally Tell Them Off And Then Apologize

I have had some people in my life who I have just had to smile, shake my head and love. From teens I have worked with to family and friends, I know people who love drama. These people just cannot hold their tongue. They have to tell you what they think of you, full force, no holding back. They would look at me and say, “I know I’m wrong, but I can’t help it. I just have to tell them off. I’ll apologize later.” I think Taylor Swift said it best. “Bandaids don’t fix bullet holes, you say sorry just for show.” That’s an apology that no one wants to hear.

Let me hear from you on your favorite Twisted Apology. Tune in next time for tips on how to offer up a sincere apology.